If you need to have multiple instances of different ROS or Ubuntu versions, one solution is a virtual machine which puts lots of overhead on the hardware and makes it very slow. A good alternative for this problem is Docker. Docker is a tool that can package an application and its dependencies in a virtual container that can run on any Linux server [1].

Some analogies to OOP:

Basically, you create images and spin of containers from images that you can work with.

Here, I have installed the docker community edition on Ubuntu 18.04 (Xenial Xerus) [2].

1) First, make sure you don’t have any old version of docker on your system:

6) Now you are ready to start, but first fix the permission problem:

The run command will start a container from a given image:

If you don’t provide a container name with the --name, then the daemon generates a random string name for your container such as “loving_tereshkova”.

If the image doesn’t exist it will pull it from hub.docker.com

for instance, to install ubuntu 20.04

to check the version, just run:

To see available images on your machine:

You can search directly from the terminal for images:

If you need to expose the ports, so your docker would be accessible from outside:

and you can type exit to leave.

to remove all dangling images:

to remove all unused images, not just dangling ones

To see the running containers:

To see all running containers:

The following command has the same output as docker ps, but it is a more updated command to it’s better to use this one

To terminate a container:

“kill” will terminate the container immediately.

Next time you want to run your container, you can use the name you gave to it :

Now, if we install some packages inside our container, we can use docker diff to the changes we made to our container:

to get into a running docker container:

to find where the images and dockers are stored:

which on Ubuntu they are under:

to remove a container:

To remove all the unused containers at once:

to remove an image:

if you have a container that has been spun from an image, you need to delete it before removing an image, or you can use the force option:

We can use the following to build an image from our container and make a new image:

commit will create an image from your container:

What build does is, pulling images, running an intermediate container from them, run your commands on them, and finally commit that and build an image, so it is basically an automated commit.

First, search in the hub.docker.com for an image i.e. “Ubuntu” to find the right name then create a file and rename it “Dockerfile” and add the following to that:

Now you can build your custom image:

The default file that docker looks for is Dockerfile without any extension. After building your image you can  a container from that with:

First search in the hub.docker.com for PHP and from the list pick Apache, at the current time the latest stable Apache is 7.1.11-apache. Just like CMake, create a file and name it Dockerfile and add the following line into that:

create a src directory and add the index.php and simply put a hello world message in it:

now we are ready to build it:

After a successful build, list all your images, and you should the image that you just created:

but in our case, since we need to expose port 80 we need to add a line:

Now you should be able to see your running container:

to stop your container:

If you make changes to your project, you need to build it and create another image, which might be time-consuming. To avoid this, you can share directories, which are called volume:

which, in my case:

Now any changes to src directory in your docker project will be seen immediately in the corresponding image file and consequently in the running container.

We can also use volumes.

If you delete your container, your data stored on the container will be lost. You can use volume to store your data outside of containers. Volumes are the preferred mechanism for persisting data generated by and used by Docker containers.

We can map a directory on the host machine into a directory into the docker. This is called volume. If you delete the container, the volume won’t be deleted. To get information about the command, just run:

to display detailed information on a volume

to create a new volume:

attach a volume to a container

Now if we create some files on the home directory of  “ubuntu-container1” and create run the second instance, with the same volume, the data will be shared between these two instances:

Volume drivers let you store volumes on remote hosts or cloud providers, encrypt the contents of volumes, or to add other functionality.

Add a volume to an existing Docker container

OK this is a little hacky, First, stop the container, then find the corresponding file config.v2.json, located at /var/lib/docker/containers/<container-id>/config.v2.json

Difference between bind mounts and volume

When you use a volume, a new directory is created within Docker’s storage directory on the host machine. bind mounts are dependent on the directory structure and OS of the host machine, volumes are completely managed by Docker. Volume does not increase the size of the containers using it, and the volume’s contents exist outside the lifecycle of a given container.

To do that, you should mount your host’s X Server socket into the Docker container. This allows your container to use the X Server you already have. GUI applications running in the container would then appear on your existing desktop.

The Unix domain sockets are similar to Internet sockets, but rather than using an underlying network protocol, all communication occurs entirely within the operating system kernel.

Providing a Docker container with access to your host’s X socket is a straightforward procedure. The X socket can be found in /tmp/.X11-unix on your host. The contents of this directory should be mounted into a Docker volume assigned to the container. You’ll need to use the host networking mode for this to work.
You must also provide the container with a DISPLAY environment variable. This instructs X clients – your graphical programs – which X server to connect to. Set DISPLAY in the container to the value of $DISPLAY on your host.
Refs: [1]

Now inside the container, install the xeyes

Then run the following command on the host:

Now on the host, we open up xhost only to the specific system that you want, (for instance with the container’s ID stored to the shell variable containerId )

Now if run xeyes on the docker, it will be forwarded to the host:

Developing your project on Docker

I have used VSCode for that purpose, first install the following extensions:

Now run your container and in the VScode click on the remote explorer: 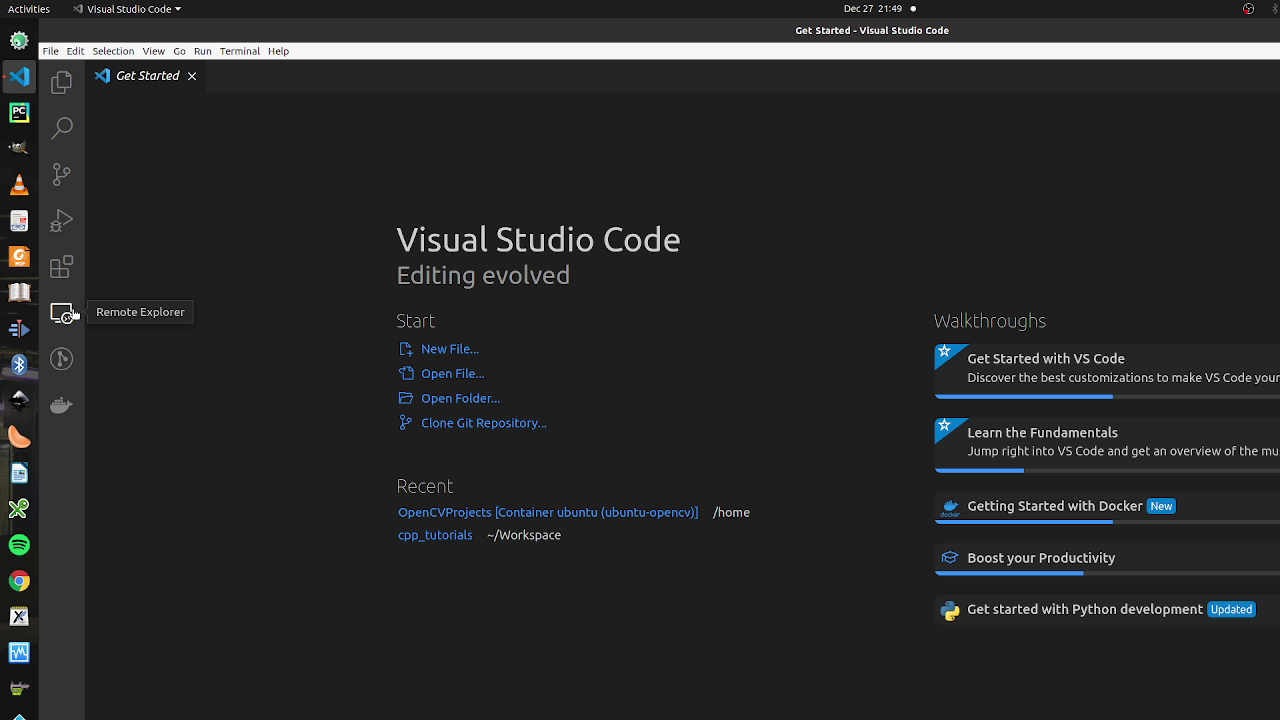 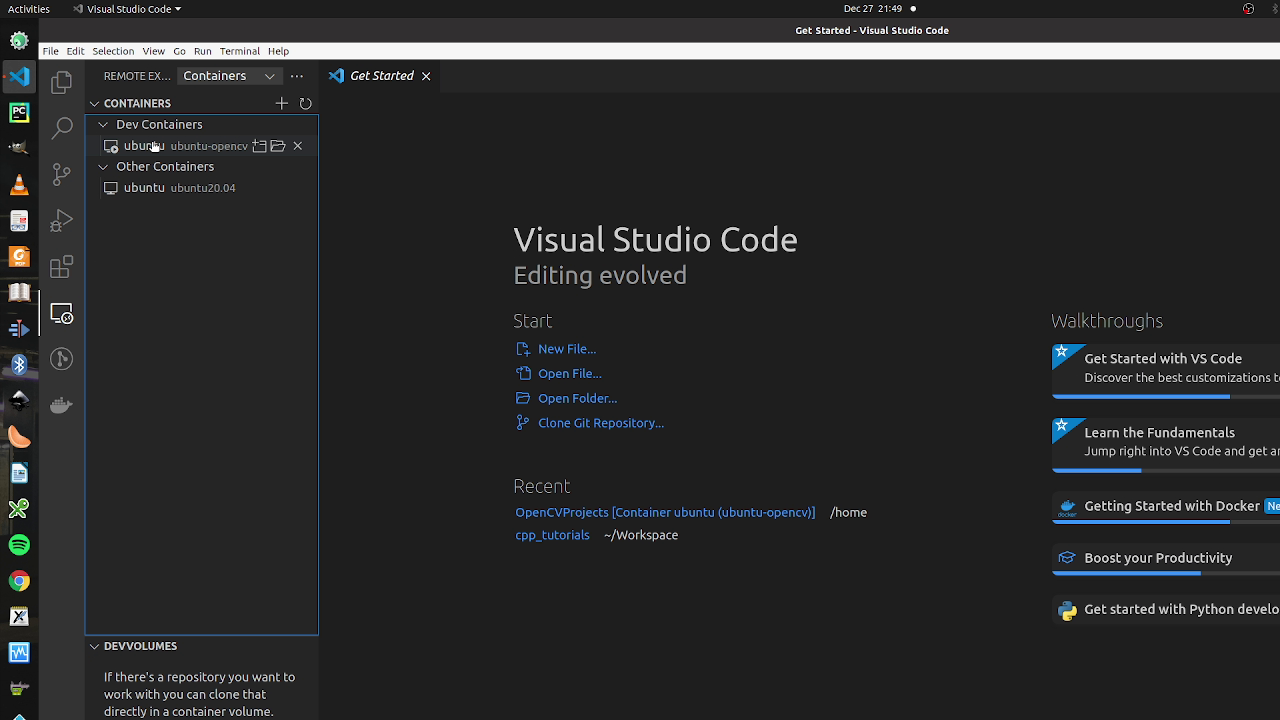 if this is the first time that you are doing this, it will initialize a new instance of VSCode, now in the new VSCode, at the bottom, you can see the connected container: 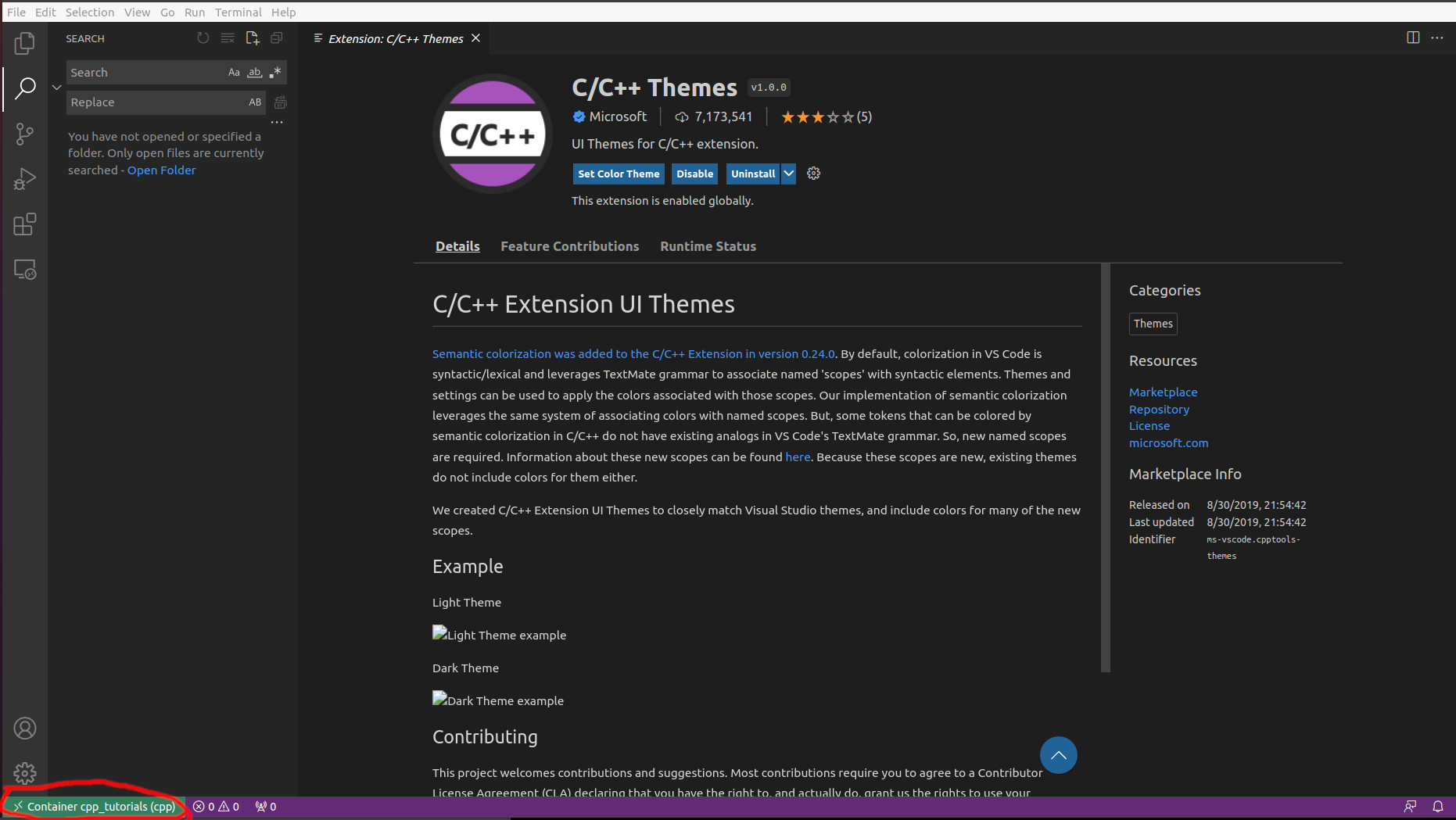 Now you should reinstall your extension such as C/C++ CMake, CMake Tools, CMake Integration in the  container: 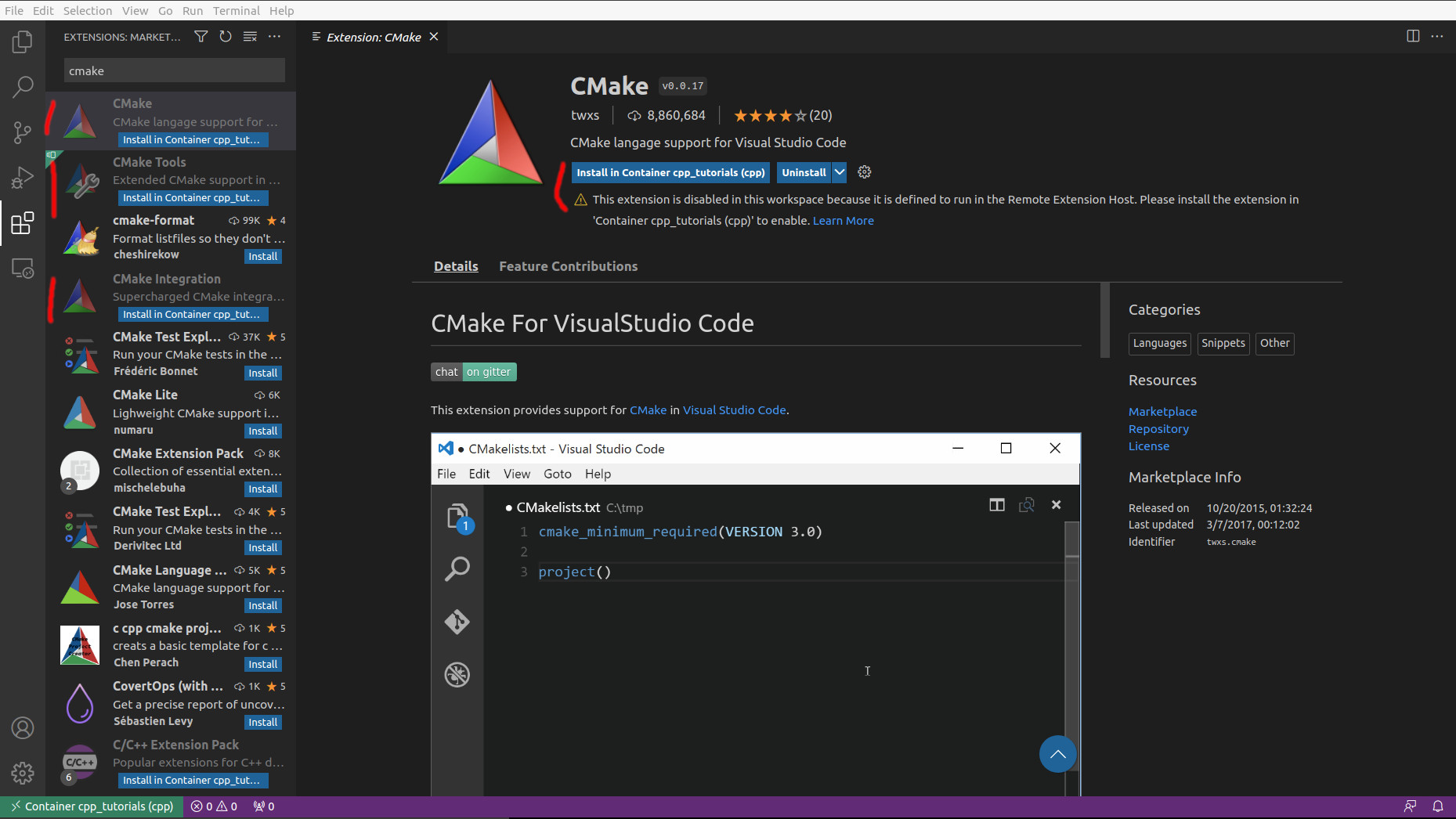 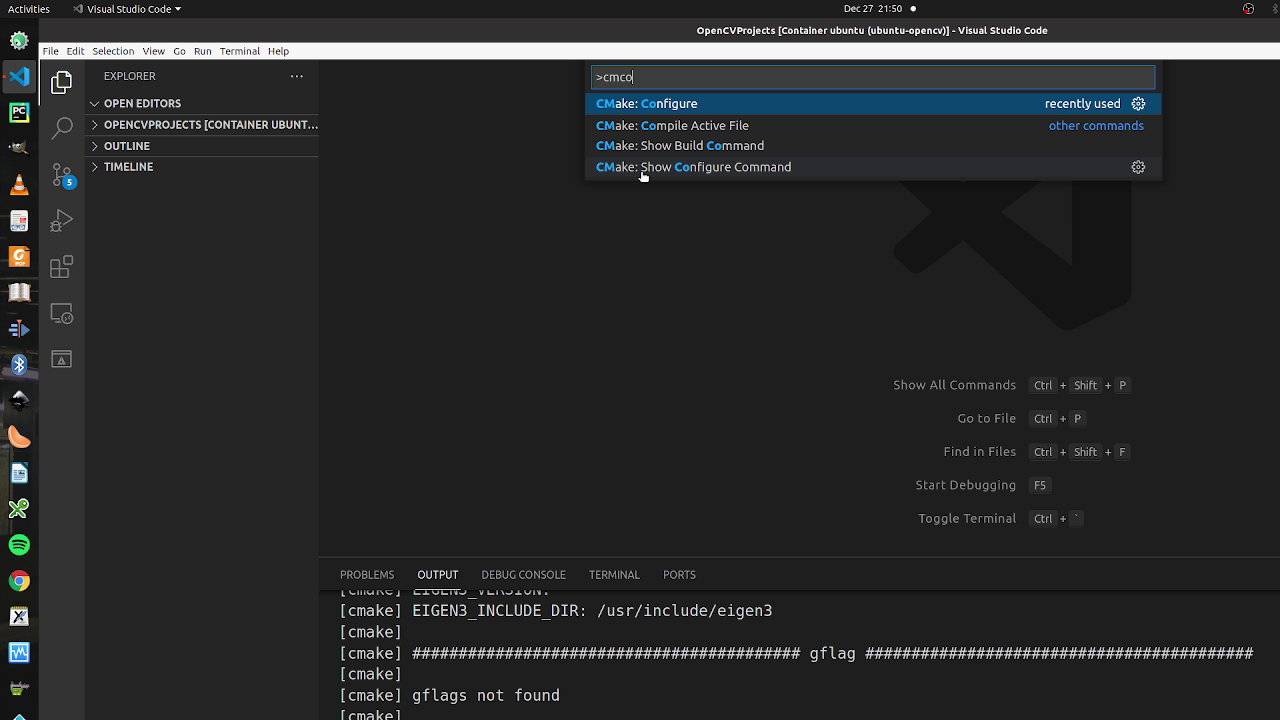 and now by clicking on the CMake icon on the left, we build/ debug our applications 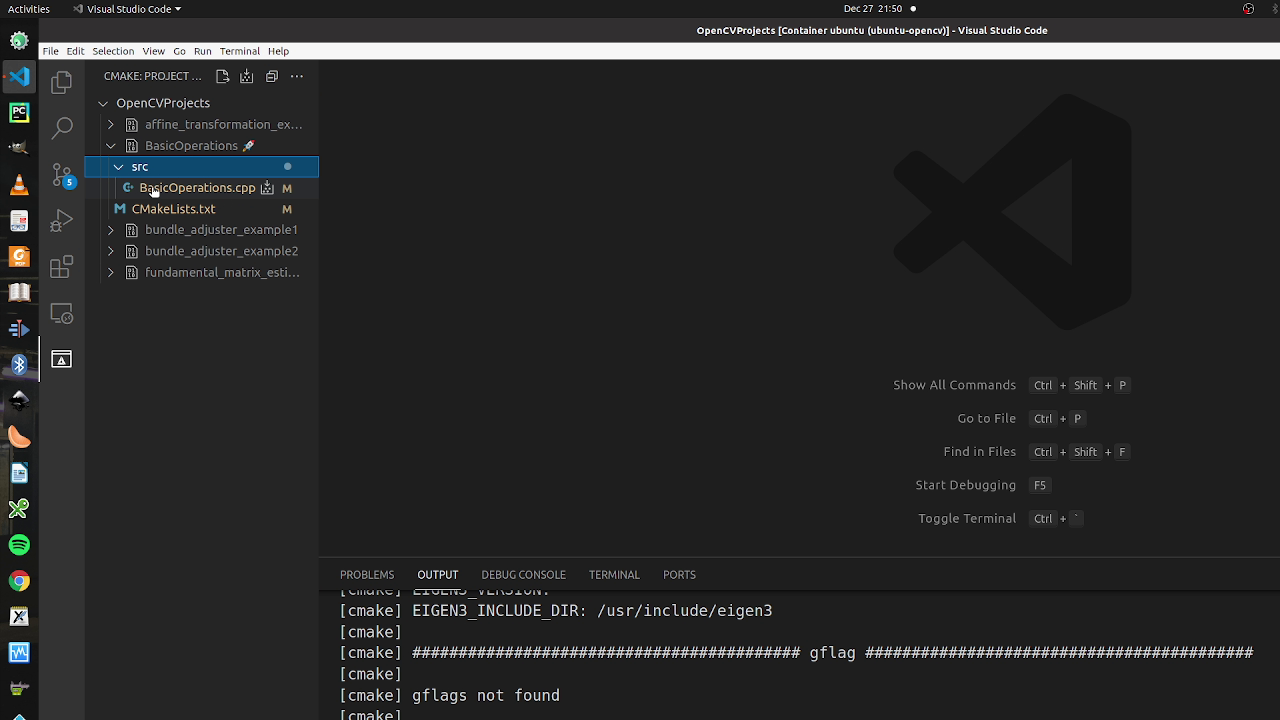 Docker Compose is a tool for defining and running multi-container Docker applications, whereas a Dockerfile is a simple text file that provides the commands a user could use to create an image.

Docker Compose allows you to specify the services that make up your app in a docker-compose.yml file so that they can run in a separate environment. By simply running docker-compose up, you can get an app up and running in one command. If you add the build command to your Dockerfile, Docker compose will use it.

Your Docker workflow should be to build a suitable Dockerfile for each image you wish to create, then use compose to assemble the images using the build command.
In the above example version: '3' tells Docker the version of docker-compose you want to use. You can specify the path to your individual Dockerfiles using the build /path/to/dockerfiles/blah where /path/to/dockerfiles/blah is where blah’s Dockerfile lives. In our example, you will have separate containers, one is redis-server and the second one is web.