This work is the second part of my master thesis (part I). In this part, I developed an algorithm for 2D pose estimation of the human body. To do this, I created a software with QT that could generate 2D contours representing human body. Then I send these contours for evaluation to CNS(Contrast Normalized Sobel) [1] and finally picked the contours with the highest response.

A 2D contour is a set of points connected to each other. By changing the relative
position of these points we can generate contours that can describe a human, car,
tree or any arbitrary shape in 2D space. In this work first, we need a system that
can generate 2D contour of a human in the different pose. After this step, we need
a system for evaluating the generated contour on an image to see how close is
the contour to the pose of player in the image.

We considered 44 points on the human body to create a contour. These points are
pointing prominent part of the human body like the top of the head, ears, neck, shoulder,
elbow, wrist, knee, ankle and feet. There are several ways to connect these points
to each other i.e. straight lines, pronominal, different kind of curve fitting. In
order to make the contour smooth in a way, it could describe human body curves-
turns meanwhile keep it computationally inexpensive we used cubic splines for
connecting these point.

Now by changing the location of any these 44 points, the interpolated points would
also change and a new contour would be formed. But creating the contour by this method is pretty complicated and computationally expensive. We don’t know
how should we move these points to generate a contour of a human, furthermore
searching through 44 dimensions is computationally expensive.
To make an automatic way for generating human contours we created a training
set of several images of a player in different poses. Then we manually registered
these 44 key points on the body of the player in each individual image. Based on
the items in the training set, we can generate contours of human in the different pose
in detection phase.
We also tried to reduce the dimensions of our problem from 44 to some smaller
meaningful number. For that purpose, we used dimensionality reduction by PCA
(Principal component analysis).

We put the data regarding the x and y position of the point in these contours plus
the interpolated point as a raw entry in a matrix of data. In the next step, we tried to
find principal components of these data by finding the eigenvalue and eigenvector
of these data. After calculating the eigenvalues of these data in the matrix, we
sort them from largest value to smallest one and we pick those who contribute
90%. In the other words we sum up all the eigenvalues and then from sorted
eigenvalues in descending order (largest first) we contribute eigenvalues until the
sum of them is less than 90% of total eigenvalues.

To create a training set for the PCA (principal component analysis) we recorded
the activity of a player in different poses and we manually labeled these 44 key
points.

By selecting 44 points on each image and generating 3 interpolated points for each
pair of points and considering the (x,y) coordinates of each point our data would
have 44 × 2 × 4 = 352 dimension. To calculate PCA we have used OpenCV.
By taking into account the 90%, we found that
The optimal number of dimensions is 4 and we reduce our problem into 4 DOF. 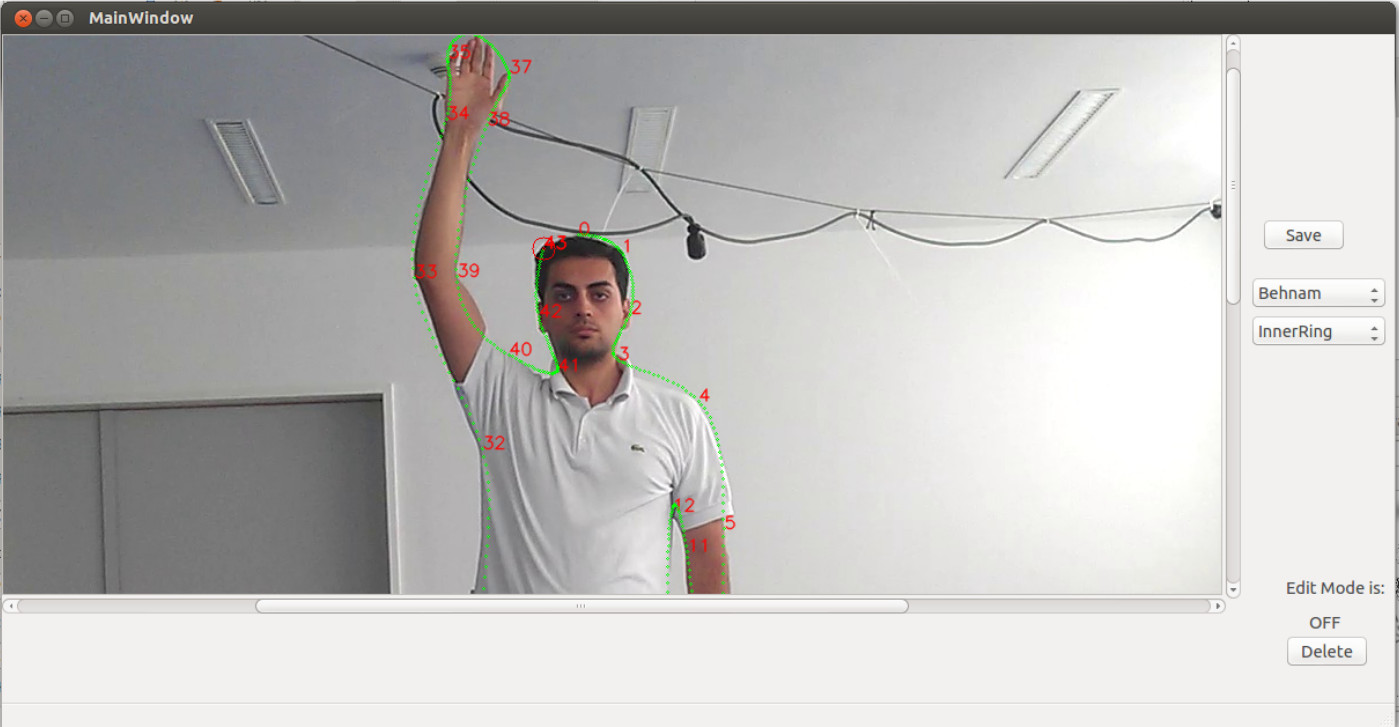 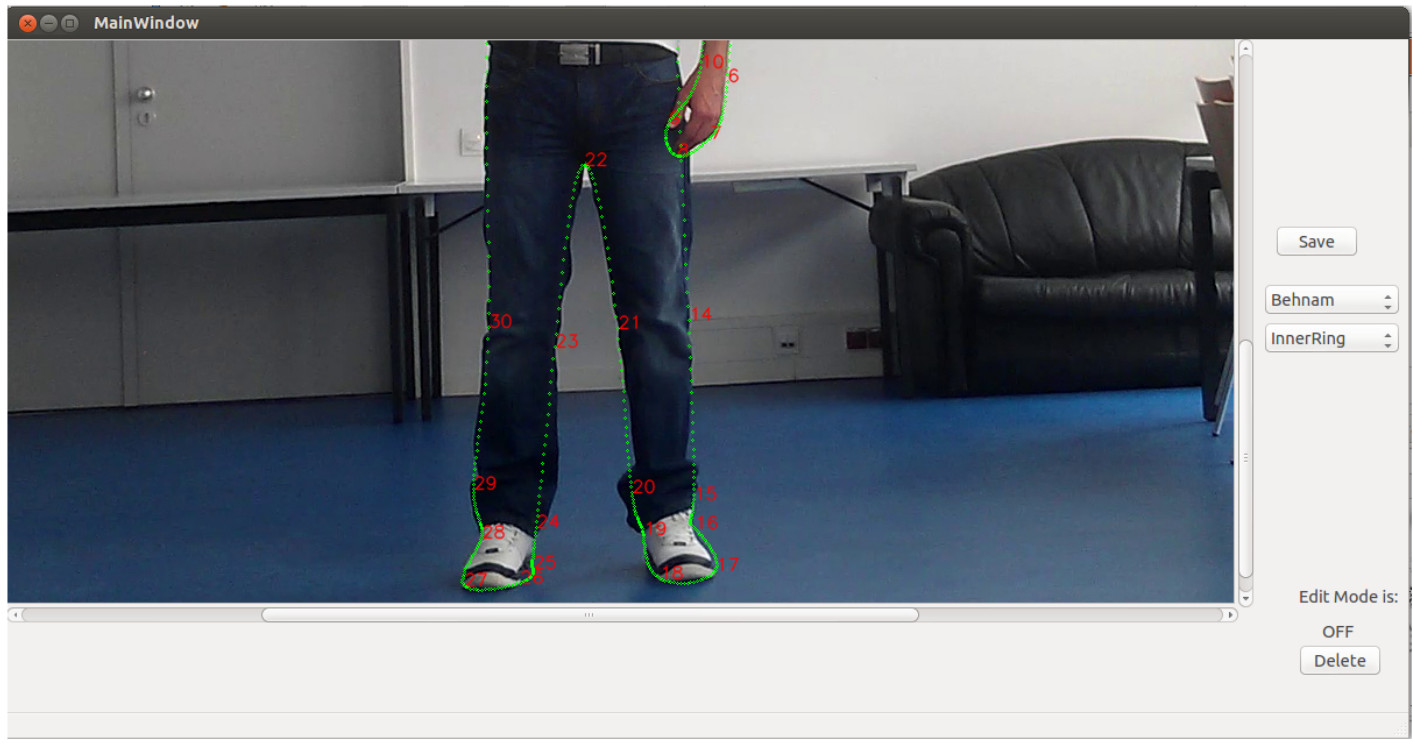 To visualize the generated contour with these 4 parameters a software has been
designed with four sliders for each principal component respectively. By chang-
ing the position of each slider, a new value would be set for respective principal
component and by doing a back projecting with PCA, a new contour would be
generated and displayed on the image. 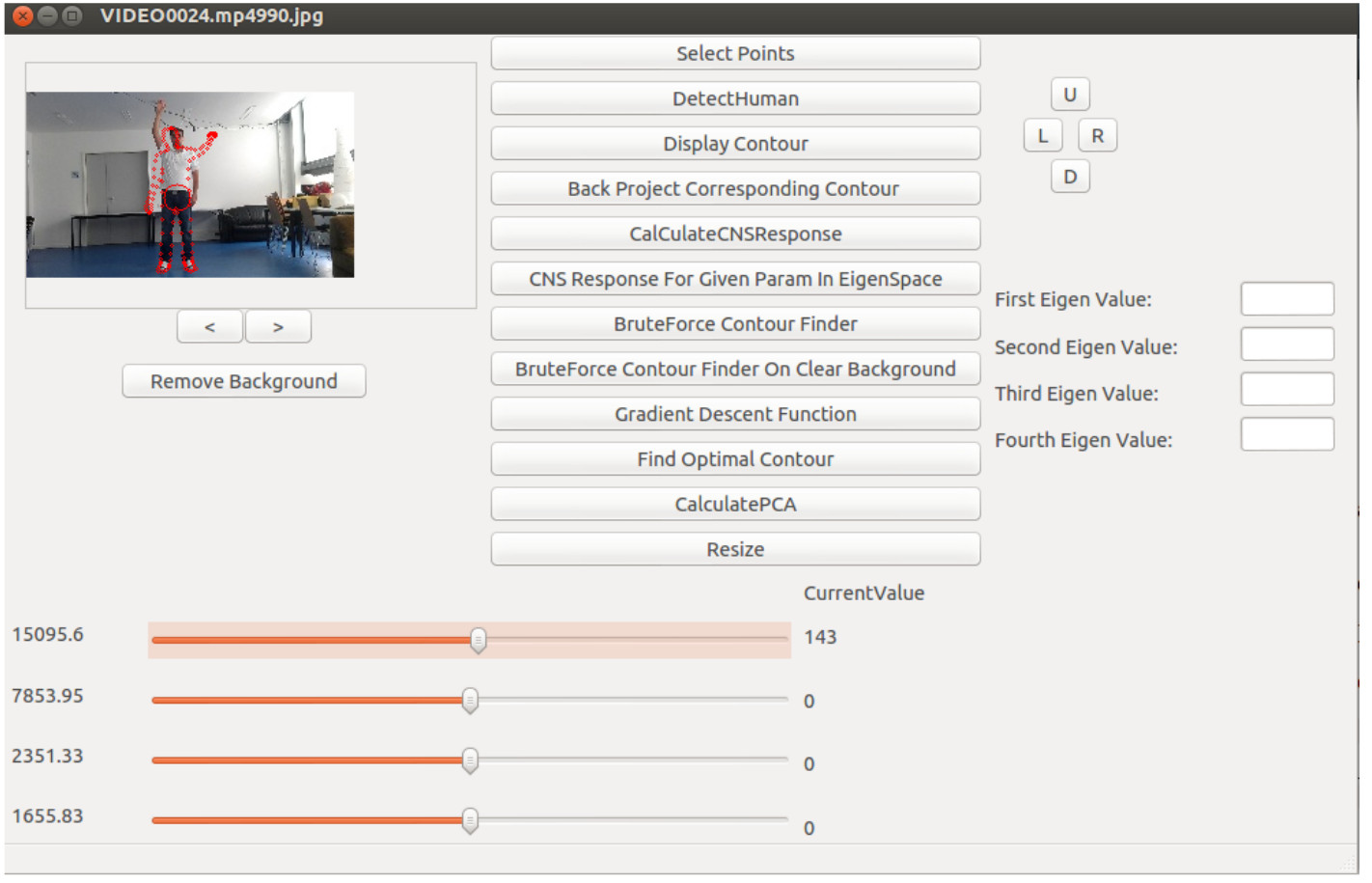 CNS response from optimal contour on image with clutter noise

CNS response from optimal contour on image with a clear background

All text and images in this article are taken from my master thesis, the full document can be downloaded here.

[…] is the part I of the work that I did for my master thesis (part II). In this work first, I computed HOG (Histogram of oriented gradients) on my images and then sent […]

This website uses cookies to improve your experience while you navigate through the website. Out of these, the cookies that are categorized as necessary are stored on your browser as they are essential for the working of basic functionalities of the website. We also use third-party cookies that help us analyze and understand how you use this website. These cookies will be stored in your browser only with your consent. You also have the option to opt-out of these cookies. But opting out of some of these cookies may affect your browsing experience.
Necessary Always Enabled
Necessary cookies are absolutely essential for the website to function properly. These cookies ensure basic functionalities and security features of the website, anonymously.
Functional
Functional cookies help to perform certain functionalities like sharing the content of the website on social media platforms, collect feedbacks, and other third-party features.
Performance
Performance cookies are used to understand and analyze the key performance indexes of the website which helps in delivering a better user experience for the visitors.
Analytics
Analytical cookies are used to understand how visitors interact with the website. These cookies help provide information on metrics the number of visitors, bounce rate, traffic source, etc.
Advertisement
Advertisement cookies are used to provide visitors with relevant ads and marketing campaigns. These cookies track visitors across websites and collect information to provide customized ads.
Others
Other uncategorized cookies are those that are being analyzed and have not been classified into a category as yet.
SAVE & ACCEPT
wpDiscuz
1
0
Would love your thoughts, please comment.x
()
x
| Reply